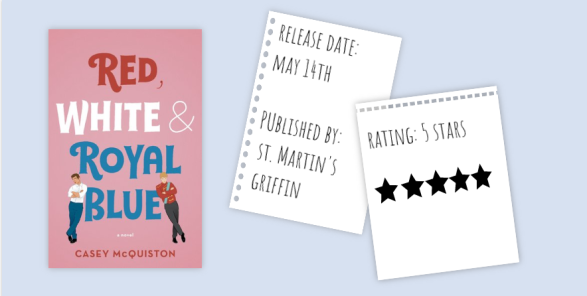 I received this book from NetGalley in exchange for an honest review.

As you might know, I don’t usually read fluffy romantic books, Malka is usually the expert in that sense. However, when I saw the title, cover, and synopsis for Red, White, and Royal Blue, I knew I had to read it! It was such a refreshing break from all the angsty books that I generally read, and I enjoyed it very much!

Red, White, and Royal Blue follows Alex Claremont, first son to the President of the United States of America. When a mishap at the most recent royal wedding threatens international relations, Alex has to play nice in a fake friendship with his arch-enemy, his royal highness Prince Henry of Wales. Henry is charming, stuck-up, and disgustingly perfect, or so Alex thinks. As their fake friendship develops, Alex begins to see the sweet genuine person that Henry is under his princely exterior. When one thing leads to another Alex and Henry find themselves hiding a secret relationship in the midst of Alex’s mother’s reelection campaign.

Gah, there were so many amazing things about this book I can’t decide which part to rant about first! I guess I’ll start with the amazing cast of characters. From the main characters-Alex and Henry-to the side characters-Alex’s mom and sister and Henry’s best friend-everyone was just so perfect. I loved how Alex’s family interacted, his mom, the President (female president for the win!!) is incredibly supportive and Alex has a fantastic relationship with his sister June and their best friend Nora. Yes, I am totally including Nora as part of the family because she 100% is. The banter throughout the book between all the characters is just amazing! They’re all so hilarious and I can’t get enough of all their interactions.

As for Alex and Henry, they’re just so cute together! I absolutely adore the enemies-to-lovers trope, especially when they’re like…wait…this very strong burning feeling I feel for said person is…love?? Alex is generally pretty clueless (classic American), and is figuring out that he’s bi while developing this relationship with Henry. While Henry is deep, deep in the closet out of fear of the enormous repercussions he could face as coming out as a gay member of the royal family. I’m not going to lie, there is some angst, but it’s handled so well.

Some of you might know about my love for writing dramatic letters from my open letter to my TBR, and let’s just say that in this book there is a fantastic exchange of letters going on and it was probably one of my favorite parts of the entire book.

This book made me very happy and also made me realize that maybe a cute book thrown in every now and then wouldn’t be the end of the world.

Are you planning on reading this book? Do you like reading cute books that bring you joy or ones full of angst?